A good steak is like a little black dress: timeless, and appropriate no matter the season or occasion. But since steak is generally a more expensive meat, you want to make sure the cut you select is a good investment. Arm yourself with the steak basics, head to the butcher counter and make your pick with total confidence.

What is the difference between grades of beef?

Grading is a quality rating assigned to a cut of meat depending on several characteristics. The four highest-quality grades of beef in Canada are A, AA, AAA and Prime. The grading criteria is identical except for the degree of marbling, which is used to distinguish between the grades. Canada AAA is the premium grade that is often available in supermarkets.

Marbling refers to the streaks of fat that are dispersed within the muscle of the meat. Fat equals flavour, so a well-marbled steak is a good sign that deliciousness is on the way. Prime beef has the most marbling, and is very tender.

What cuts of steak are the most tender?

Follow this rule of thumb for picking out a cut of steak, according to Canadian beef farmers: The further from the head (chuck, brisket), hoof (shank), or hip (round), the more tender the meat.

What’s the deal with dry-aging beef?

When meat is hung and left to age, several magical flavour-boosting processes occur. As the meat sits, enzymes begin to break down muscle fibres and connective tissue, making it noticeably more tender compared to fresh steak. This enzyme action, along with changes that occur when the fat is exposed to oxygen, leads to a more concentrated flavour, giving the beef a complex, nutty aroma. For knock-your-socks off taste, look for a steak with excellent marbling that has been aged for at least 14 days.

Why slice against the grain?

The “grain” of steak refers to the direction that the muscle fibres run in. Eating meat that has been sliced parallel to the grain will be tougher and harder to chew than meat cut against the grain, where some of the breakdown of the muscle fibres has been done for you. 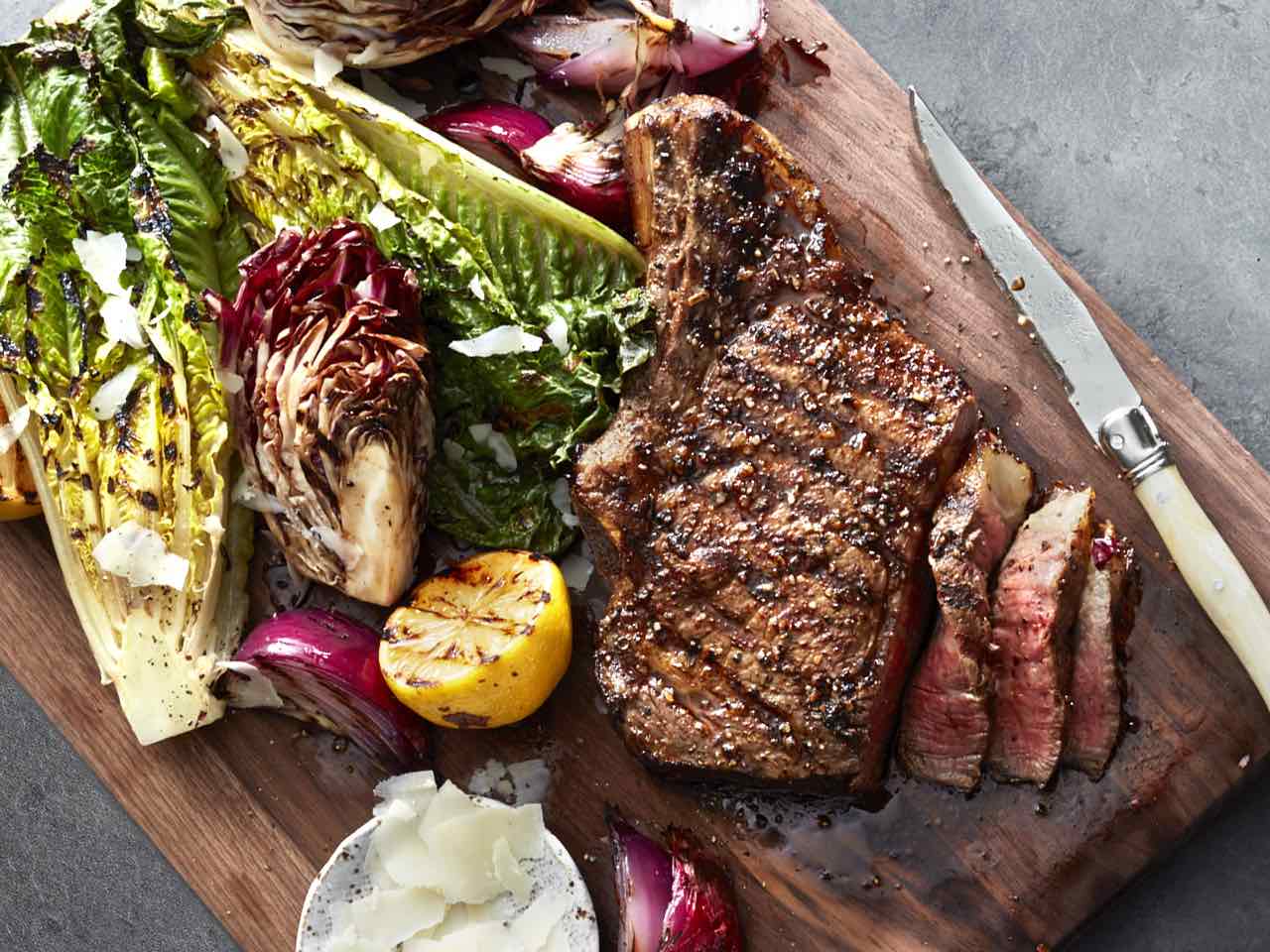 Rib steak is cut from a prime rib roast and can be identified by the telltale curved bone attached. Ribeye steaks are more common, and are the same cut, but with the bone removed. Essentially a boneless prime rib, ribeye steaks are rich, flavourful and juicy. This is a pricier cut, but the results are well worth the splurge. 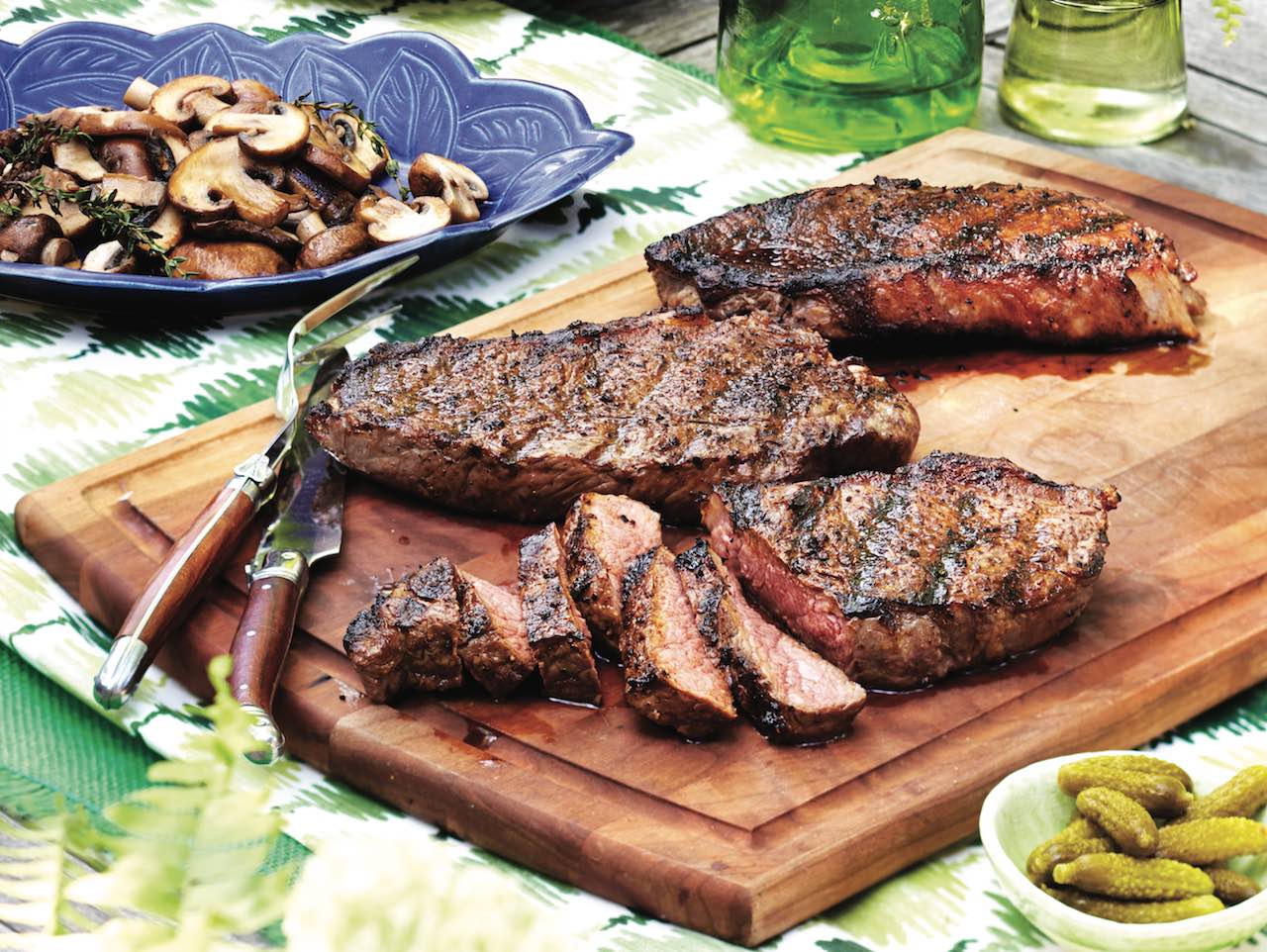 Strip steak is from the short loin of the cow (the portion of the back behind the ribcage), and is sold either boneless or bone-in. This moderately expensive cut is prized for its excellent marbling and bold beef flavour. 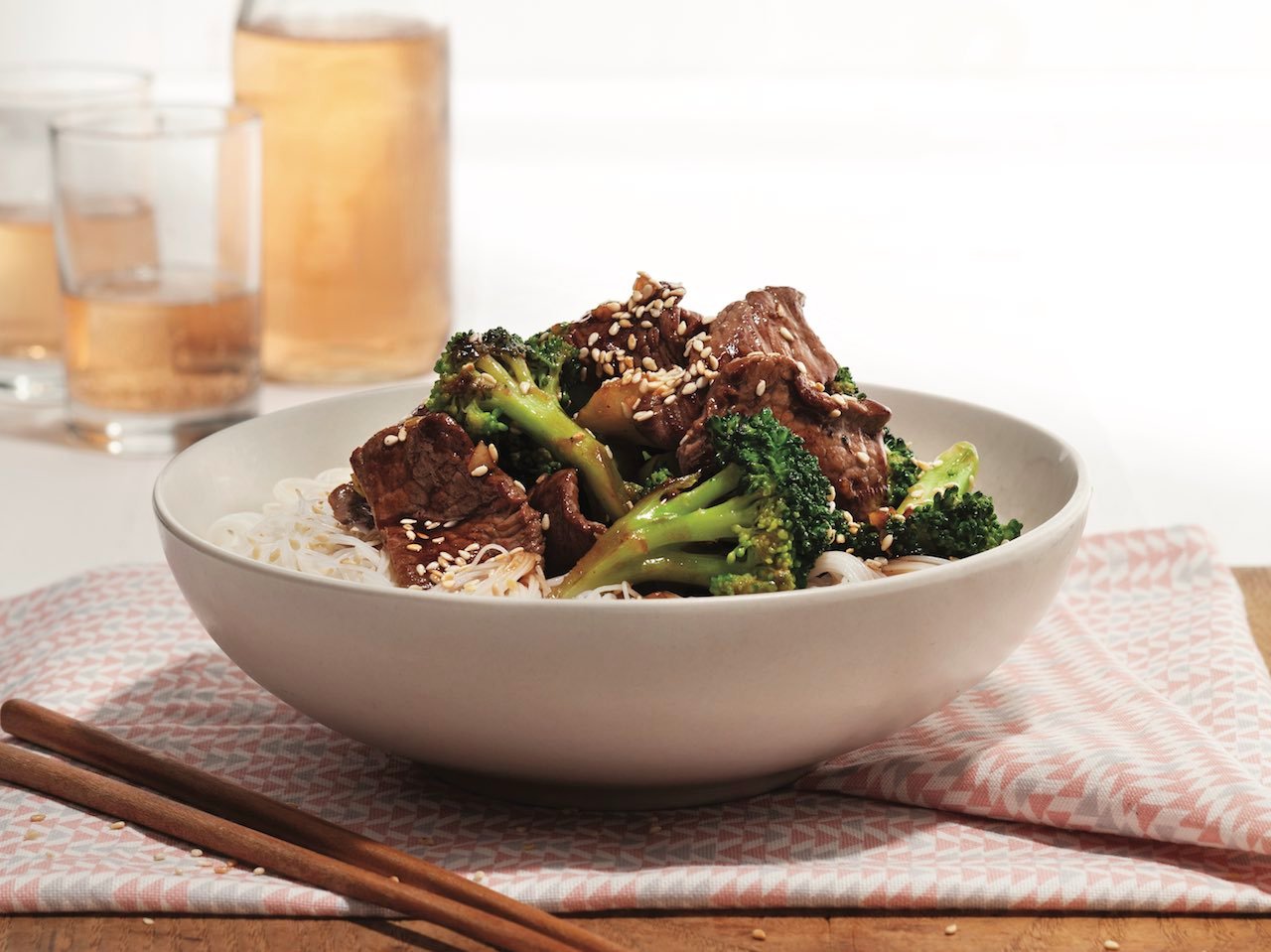 Not to be confused with the (superior) strip loin steak, sirloin cuts come from the hip area of the cow, and are generally tougher, less expensive steaks. Low, slow cooking techniques like braising and stewing will help tenderize the meat. 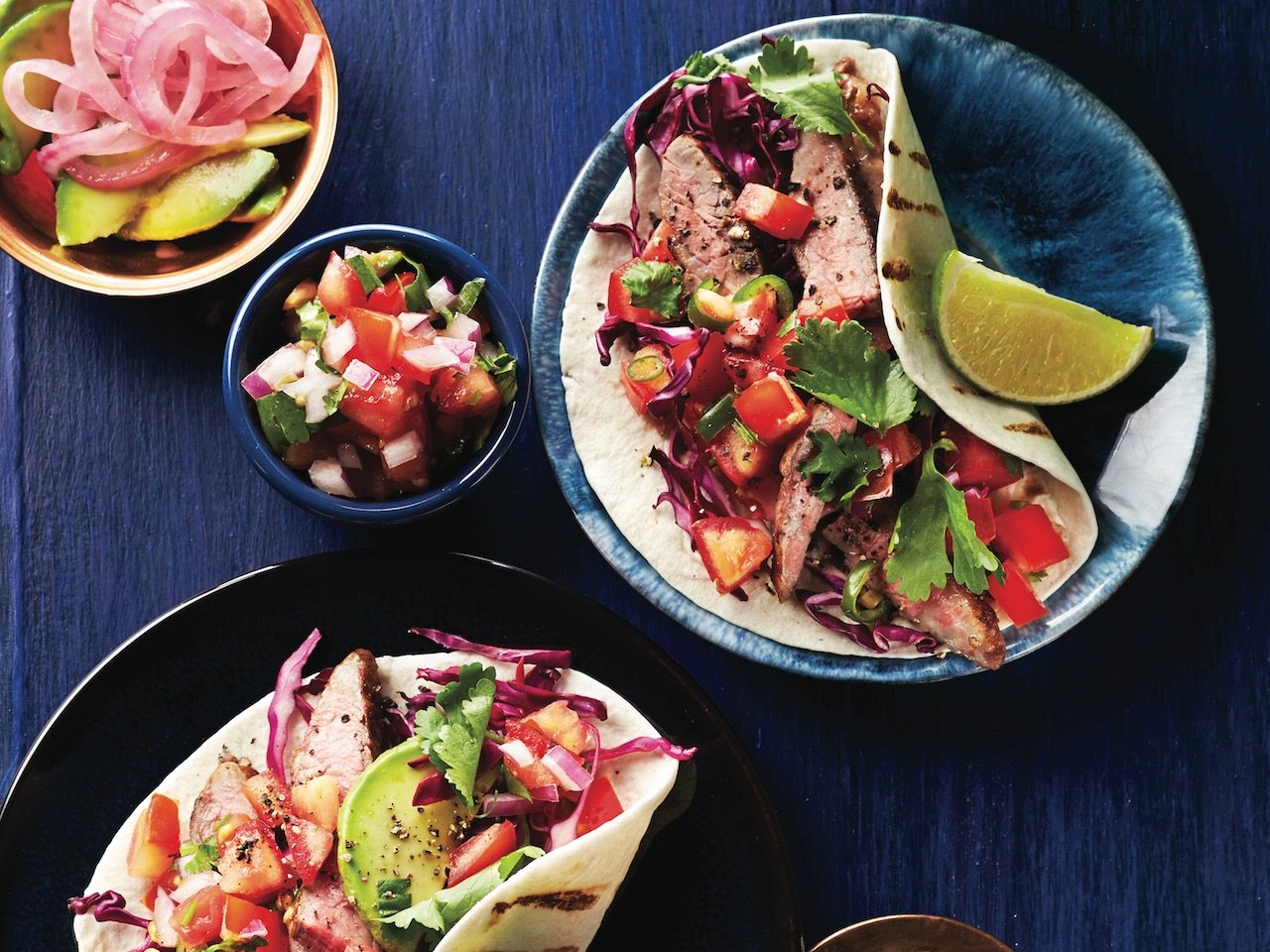 Flank steak is a large, flat cut from the underside of the cow. Similar to skirt steak, it’s thin and cooks quickly. While very flavourful, flank steak is a leaner cut that can become chewy if not cooked correctly. To counteract this, avoid cooking flank steak past medium and slice it thinly and against the grain before serving. 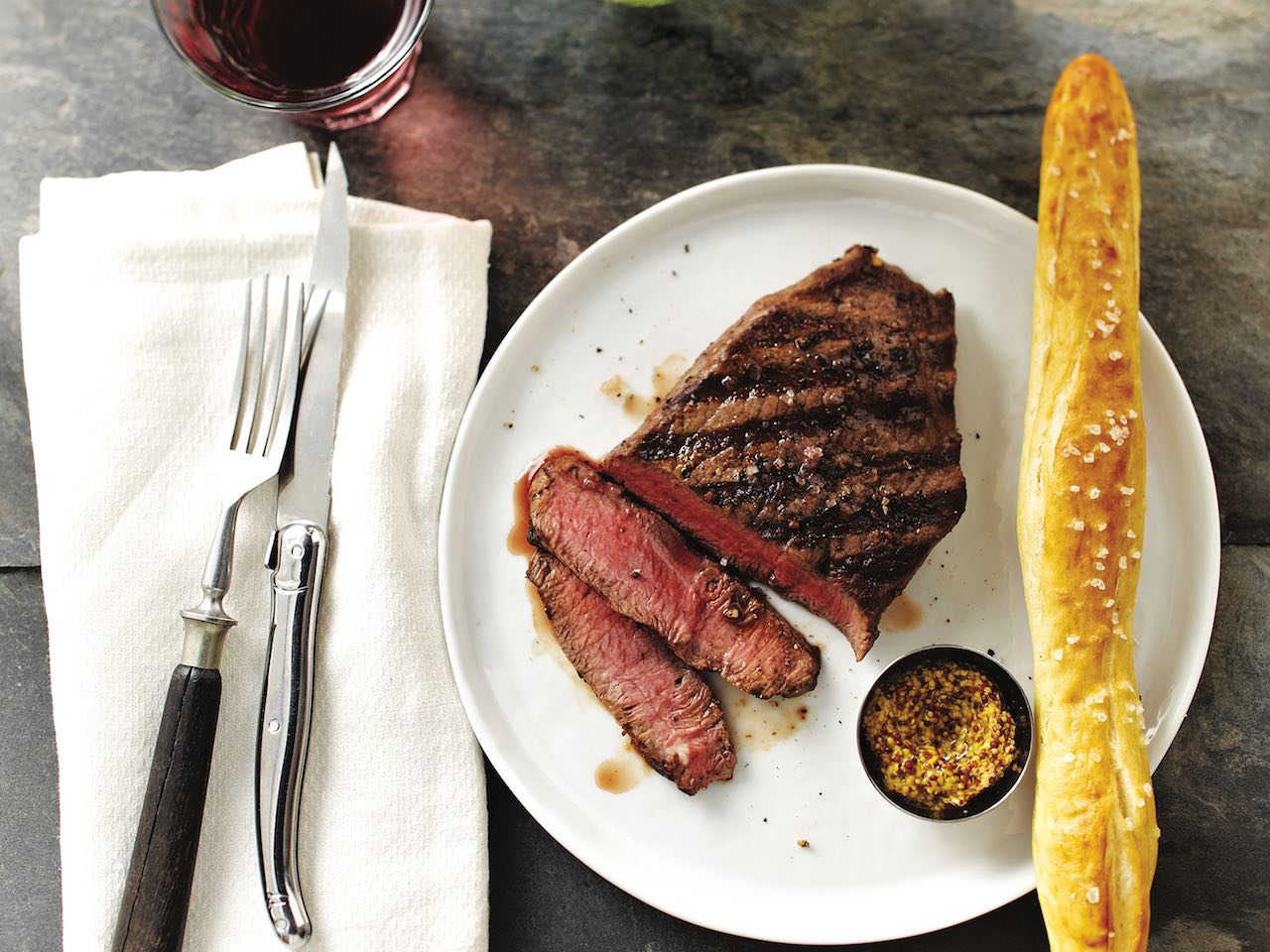 Flat iron steak is a thin cut sliced from the top of the hard-working shoulder muscle, but unlike other blade steaks it’s free from the unpleasant gristle that runs through the meat. This inexpensive cut is quite flavourful and can deliver delicious results when done right. Try marinating it before cooking to tenderize the meat and slice thinly against the grain. 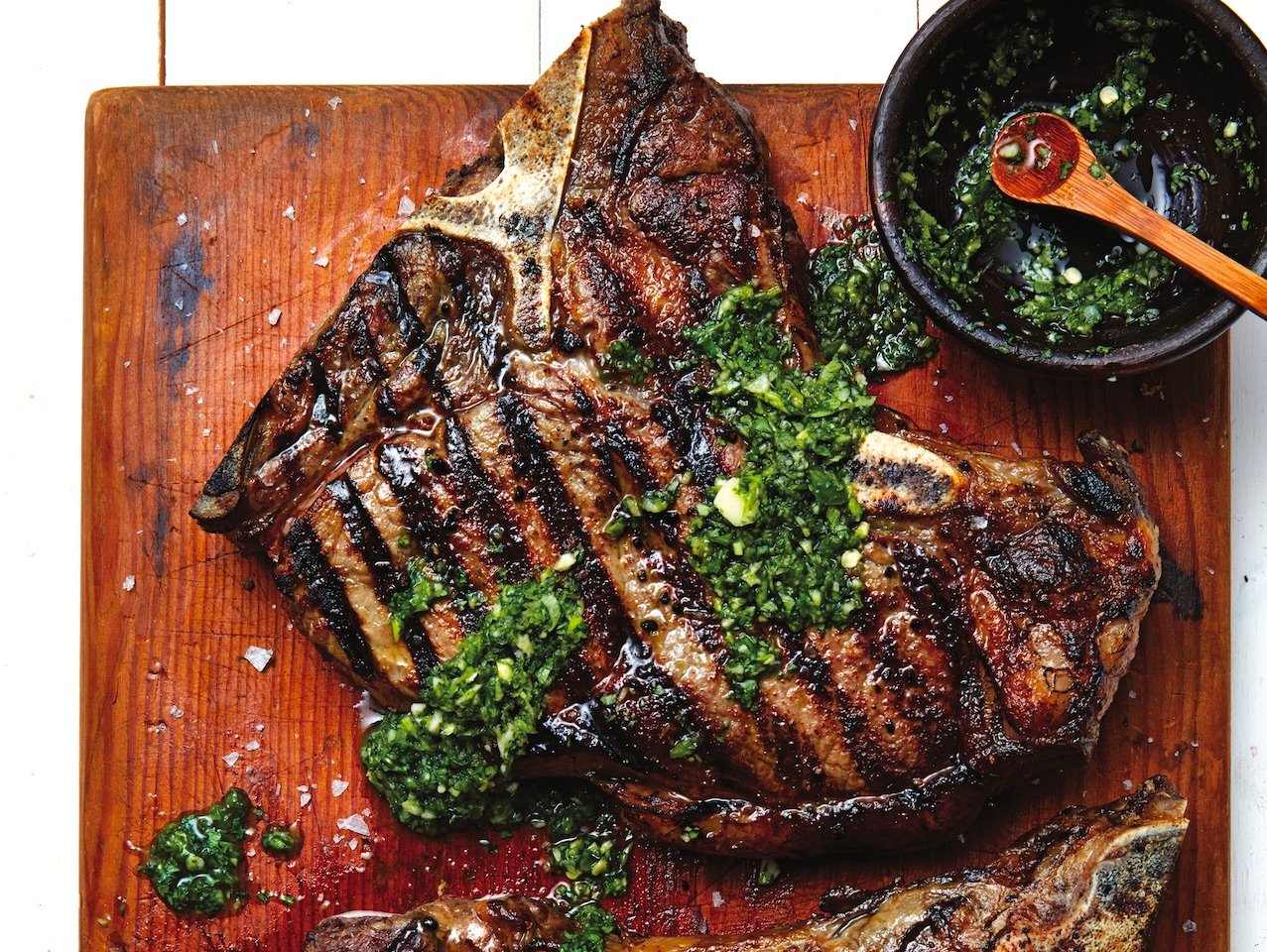 T-bones are like two steaks in one. The t-shaped bone that runs through the meat divides the larger striploin, and the smaller tenderloin muscle, for a winning combination of flavour and texture. A porterhouse steak is a giant T-bone that has a larger tenderloin section, which makes it more expensive. 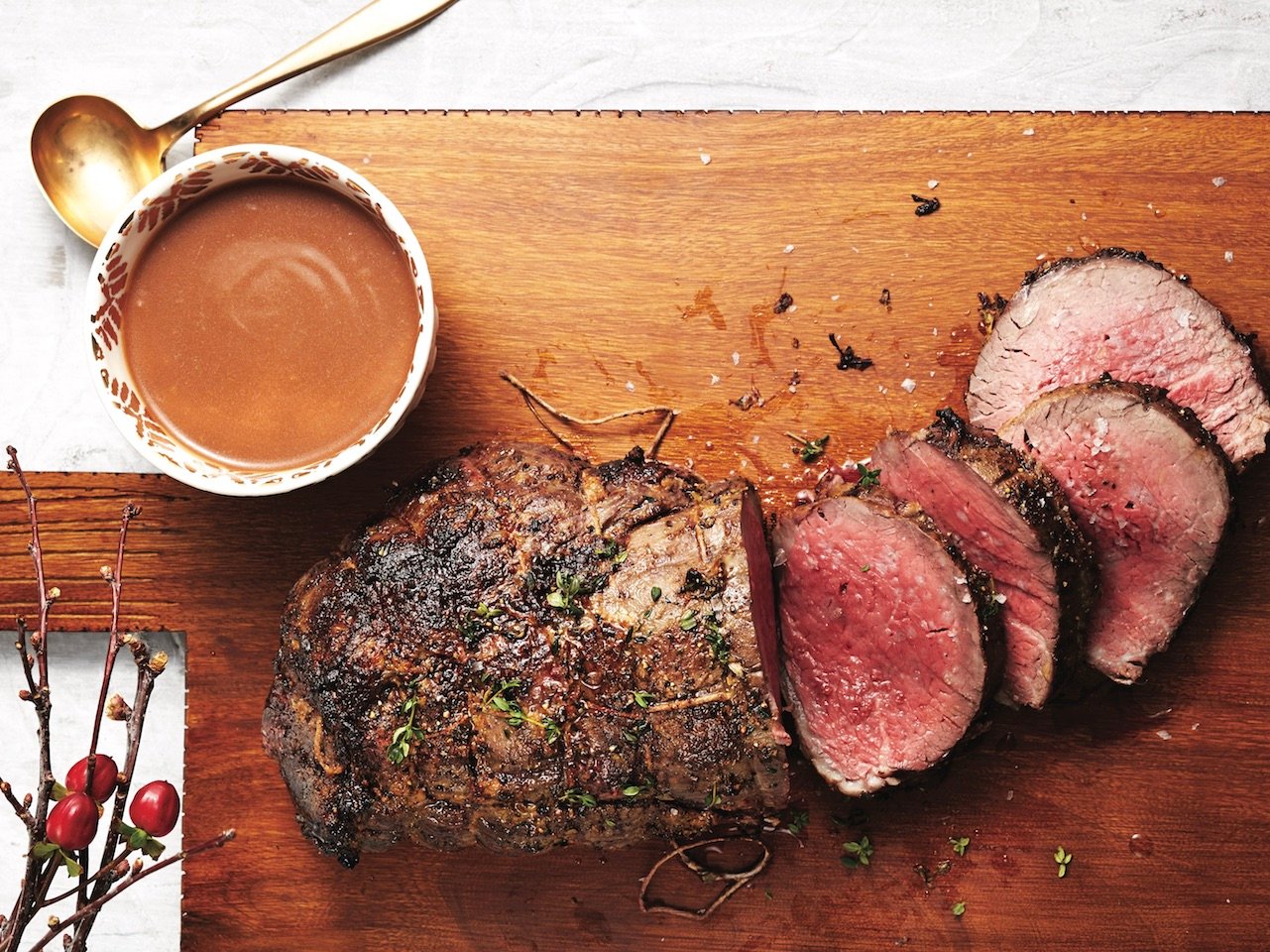 Filet mignon is cut from the tenderloin (see above), the most tender muscle of the cow, and is known for its luxurious melt-in-your mouth texture. Although exceptionally tender, filet mignon has a very mild flavour and benefits from generous seasoning.

Best used for: Recipes calling for a pepper or herb crust. Try it: Peppery beef tenderloin with crispy shallots.