My son Ziphion’s high school graduation last summer was a very emotional day for me. It felt like time stopped when I heard his name called, as I remembered everything he had to overcome to get there. Then the moment ended, and Ziphion walked across the stage with his diploma, a certificate in French and an Ontario honours award. With both tears and a smile on my face, I turned to my husband—the look we shared was one of pride and joy, but also relief. He won!

After a year’s break, Ziphion starts university this fall. Like any mom, I’m proud. But I’m not like any mom: my son’s public school education was a daily lesson in systemic racism, and our family’s efforts to get justice turned into a very public, high-profile battle with an entire school board. As I learned about the dangers that Black children face at school—including consistently higher rates of suspensions and expulsions—pushing to change that reality became a permanent part of my life.

We live in York Region, just north of Toronto. Ziphion started school filled with hope and optimism. He’s always been a self-assured, well spoken kid—when he was six he began reciting speeches by Marcus Garvey, Martin Luther King Jr. and, later, Barack Obama, at public events around the city, even using their accents. His grade one teacher described him as intelligent, confident, kind and funny, with a zest for learning. But I believe that his confidence intimidated other teachers throughout his school years, teachers who weren’t prepared for the personality and shine of this Black boy.

By grade two, elementary school had become traumatizing, with almost-daily phone calls and notes home describing unruly behaviour that we never saw or experienced from our son. In the early days, we actually thought Ziphion’s teachers were sincere, and came down hard on him. I now regret that. I have realized that racism is most dangerous when it is subtle and difficult to identify, easily hidden in accounts of children misbehaving, not listening or being disruptive.

I learned my lesson after a teacher who didn’t have my son in her class overheard a conversation in the teachers’ lounge: grown adults, disparaging my child in coded racist language. It became clear to her what was really going on, and she told my husband and I about the discrimination that was occurring.

At that point, we turned our home from a punitive environment into a progressive one. I spent every evening speaking love, life and support into him. We came up with creative ways to support Ziphion at school, like putting encouraging sticky notes into his lunch box, to cheer him up as he maneuvered through his day. The primary school experience was one of survival, and his grade eight graduation felt like a huge family accomplishment. We thought the worst was behind us, but unfortunately, we were wrong.

On the first day of grade nine, my husband and I attended orientation with Ziphion. The principal announced that he was going to demonstrate inappropriate school attire. He walked off stage, then walked back on wearing a hoodie, track pants with one leg rolled up to his knee and his hat turned backwards, as he yelled out “Yo yo yo!” At the time, my husband and I decided not to address the incident, but we knew that our feelings of hope might be short lived. Clearly the head of the school was not sensitive to issues of race and stereotyping.

Now very experienced in identifying discrimination, Ziphion would come home and tell us what happened that day. Then we would head to the school for another meeting. We were not going to allow the primary school experience to repeat itself: this time every incident and report would be challenged and examined through a lens of anti-Black racism.

The main teacher in his French immersion program was a real problem, and there were countless incidents of racial microaggressions—not calling on him, accusing him of showing off, giving him lower marks than other students with whom he worked on group projects. We had multiple meetings with her, the vice-principal and the principal, trying our best to help resolve any issues. It didn’t help. One day, Ziphion asked to go to the bathroom and instead called me, crying. It was hard to understand him through the tears, but I advised him to go to the office and stay on the phone with me until he had a chance to speak with the principal. As he waited, his teacher called down over the intercom. I heard her lie myself, saying that Ziphion had just walked out of her class without telling her and she did not know where he was.

That same year, a gym teacher (not his, just one whose class sometimes shared space with his) also picked on him, repeatedly. Again, Ziphion tried to deal with the situation early on, asking the teacher privately and quietly, “Sir, why don’t you like me?” The first word out of the man’s mouth was “because”—not “that’s not true” or “why would you say that?” “Because,” according to this gym teacher he had “seen people like him” and had to deal with their “behaviour after a summer at home with their families.”

Instead of reacting or yelling, Ziphion responded “But sir, I have always been kind and respectful to you.” That’s just one example of how he approaches things head on, but with calm strength. That time, the gym teacher apologized. But the situation didn’t improve, and soon came the final straw. That same gym teacher told an entire class that he suspected that Ziphion had gone into the changeroom to steal from them.

That is when my husband and I decided we had to work harder to protect our son. We filed a complaint with the Human Rights Tribunal of Ontario, stating that our son was being discriminated against by three teachers at his high school, including the French teacher, and the gym teacher that accused him of stealing. 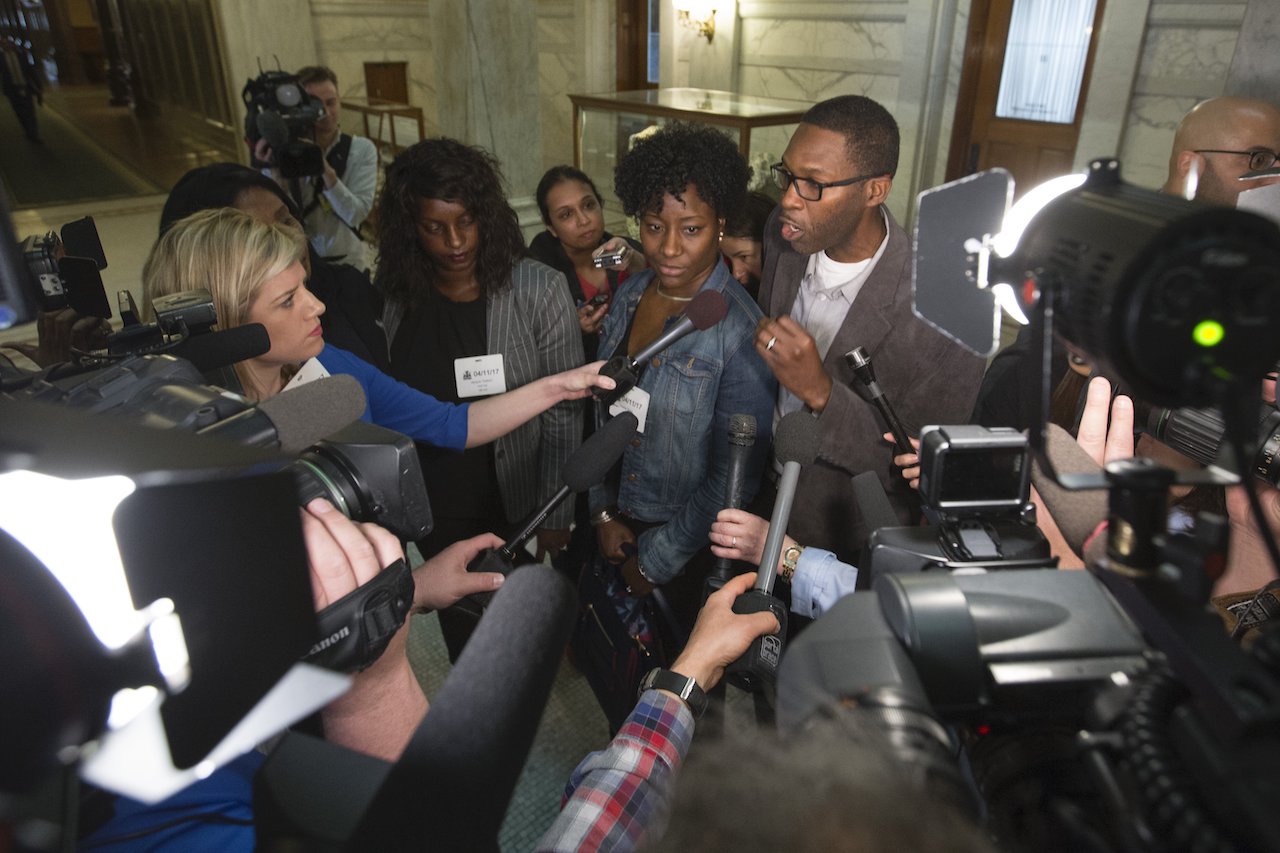 Charline Grant surrounded by media after the release of a report about racism at the York Region District School Board. (Photo: Rick Madonik/Toronto Star via Getty Images)

Soon after that, a senior member of the York Region school board went public with his own experiences of systemic racism. There was a special board meeting, which I attended to get an idea of how the board that oversaw my son’s school handled these kinds of issues. A CTV reporter asked me for an interview, and an elected school trustee, Nancy Elgie, saw me talking on camera. Elgie turned to the then chair of the school board and the director of education and asked “Is that the n— parent talking to the media again?” A superintendent walking by overheard Elgie, and filed a complaint.

Elgie’s revolting comment dragged me into another exhausting situation, but at least the media circus that followed allowed my family to expose systemic racism at the York Region School Board. The story became national news and eventually led to the board being put under the control of the ministry of education, which conducted an investigation into Elgie’s comment and a review of the board as a whole.

On the day of our human rights hearing, my family walked in holding the ministry’s review—it was scathing, and had led to the firing of the director of education, as well as Elgie’s resignation. We felt confident that we could prove that we were not crazy, overly sensitive or “playing the race card”—that the board was racist as well as dysfunctional. But we didn’t have to make our argument, as we were told on arrival that the board wanted to settle the issue without a hearing. We accepted a monetary settlement as well as an apology to my family and the community at large. Most importantly, the board promised to make changes that would prevent what happened to Ziphion from happening to another child.

Unfortunately that promise was broken. Very overt incidences of racism continue to occur both in York Region and throughout the Greater Toronto Area. In 2019, I co-founded Parents of Black Children, an advocacy group fighting for the fair and equal treatment of Black children in the Ontario education system. We developed a procedure that we hope will hold more educators accountable. On hearing about a racist act in a GTA public school, we systematically report it to the school principal, the school board and the Ontario College of Teachers. Depending on the incident, we file a human rights complaint, or file a hate crime incident report with police.

We also educate and empower other parents to fight back when they or their children have been wronged. When parents with children in the Peel Region District School Board began agitating about systemic racism affecting their children, we provided support to them: eventually, that board was also placed under review and its director removed and replaced.

As a family, we decided a long time ago not to accept racism. We will always fight against it, especially at the institutional level. As Ziphion begins university, our continued advocacy gives us a sense of closure and satisfaction. It hopefully also promotes healing, as we work to help motivate and inspire the next generation. The struggle continues.